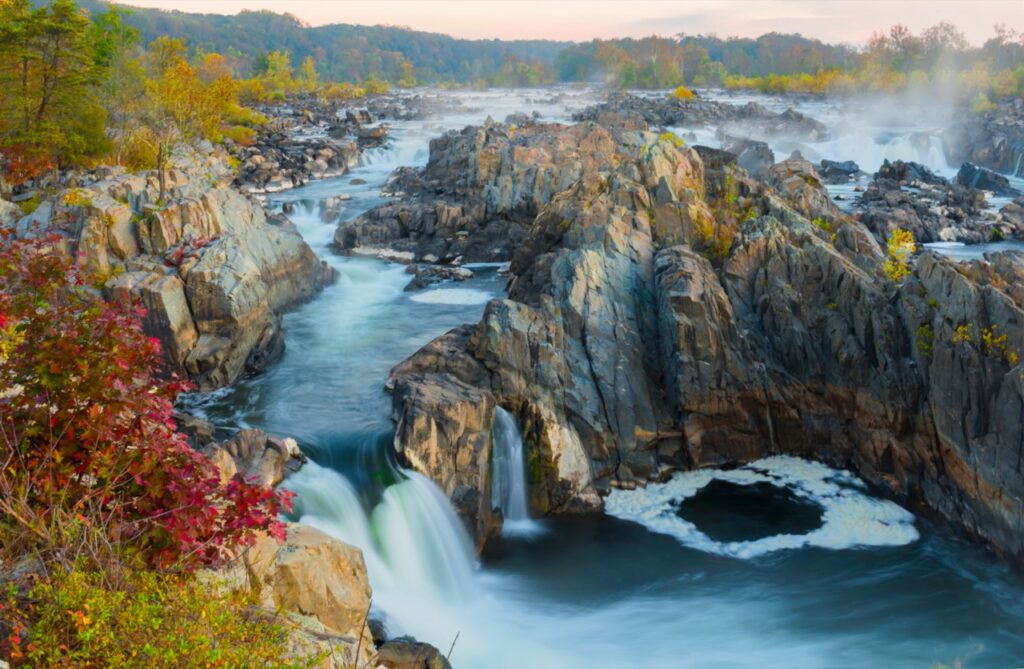 “A Hidden Gem” in Northern Virginia!

Over the years, there have been multiple accounts of the history of Great Falls, Virginia—each with its own unique perspective. Thanks to Great Falls Historical Society’s first president, Milburn P. Sanders, there is a written history of the early community.

Early farm settlements began to form in the area as early as the late 1700s. The village was known early on as Forestville but was renamed to Great Falls in 1955. The first land grant in Great Falls, dated Feb. 2, 1709, to Daniel McCarty, was 2,993 acres, then in Stafford County. Today that land lies in Fairfax and Loudoun Counties. Grants over the next 134 years added slowly to the Great Falls population, with a total of twenty-three grantees and the unknown number of family members, slaves, indentured servants, and tenants on their grants.

On Dec. 16, 1790, the town of Matildaville, in Great Falls Park, was chartered. The town was named for the wife of ‘Light-Horse’ Harry Lee, who invested in its future. It was laid out on forty acres of land, in half-acre lots. Matildaville was a support facility for the Potowmack Canal, composed of the Potomac River from Cumberland, Md., to Alexandria, with five skirting canals, one of them in Great Falls Park. In 1798, when Matildaville was retro-ceded from Loudoun to Fairfax County, it was said to be the most flourishing town in the county, containing such buildings as the Round Top House, used as a hotel, the Wyley House, and the Yellow House. The locations of these houses are unknown. A Matildaville Post Office opened in 1828 and closed in 1830. All the eighty lots were not sold. When the use of the canal ended in 1830, the town declined, and the Virginia Legislature disestablished it in 1839.

In the 1800s, a town and three villages, destined to become parts of the current Great Falls Community, were settled.

On November 15, 1959, the second Great Falls Post Office opened in the Forestville School House, which is preserved on the Grange grounds. The new post office provided service to Dranesville, Colvin Run, Springvale, and Forestville, merging these mini communities into the Great Falls Community.

Great Falls is a quiet wooded residential community with single-family homes varying styles and sizes—from Tudor mansions and Craftsman homes to expansive horse farms and luxurious estates. Known for its wealth of hiking and horse trails, as well as its sprawling parkland. Thousands of visitors flock to the community each year to visit Great Falls Park, Riverbend Park, and Scott’s Run Nature Preserve. The 800-acre Great Falls Park has been a popular outdoor attraction for many decades for boaters, fishers, hikers, cyclers, horseback riders, and picnickers. The park overlooks the Great Falls of the Potomac River, for which the community park is named. George Washington was involved with building the canal around the falls on the southwest (Virginia side), called the Patowmack Canal, which did not become commercially viable. Remnants of the canal and of a village around the canal named Matildaville are still visible in the park. The Great Falls and Old Dominion Railroad extended along Old Dominion Drive to Great Falls Park in 1906.

River Bend County Park is another gathering area in Great Falls, along with the Village Green, which hosts community celebrations around Easter, Fourth of July, Halloween, Thanksgiving, and Christmas, as well as concerts in the summer.

The community also features retail shops, local businesses, and restaurants throughout its twenty-five square miles. Residents enjoy a mix of both casual and upscale dining establishments, including the top-rated French restaurant L’Auberge Chez Francois. The Great Falls Village Centre is home to many shops, restaurants, health and fitness services, and financial institutions, as well as many other smaller shopping centers that populate the community.

The Village Green Day School is open for daycare and preschool children.