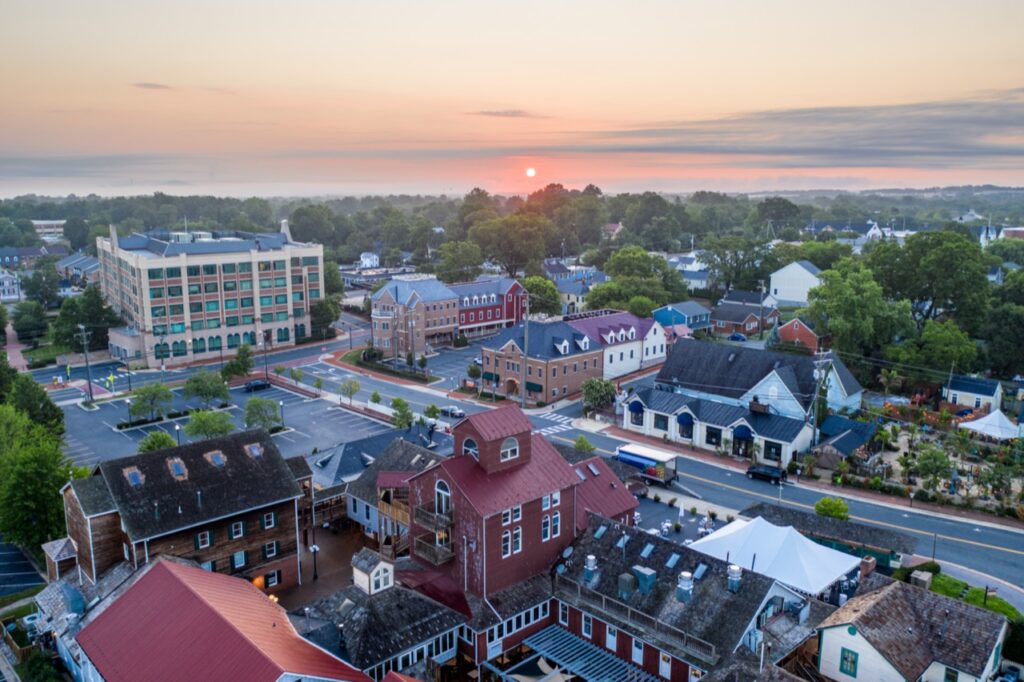 Leesburg is the county seat of Loudoun County, Virginia, situated at the base of Catoctin Mountain and adjacent to the Potomac River. It is approximately thirty-three miles northwest of Washington, D.C. U.S. Census estimates from 2020 shows a population of over 54,000 people. Leesburg, like all of Loudoun County, has undergone considerable growth and development over the last thirty years. The town has transformed from a small, rural town to a suburban bedroom community for commuters to the Nation’s capital. Growth in the town and its immediate area to the east concentrates along the Dulles Greenway and State Route 7, which parallels the Potomac River between Winchester to the West and Alexandria to the East. It is Virginia’s largest incorporated town within a county. With Leesburg’s location in the northwestern end of the Dulles Greenway, it makes the town a commuter suburb. The Dulles Greenway is a private toll road that connects to the Dulles Toll Road at Washington Dulles International Airport.

European settlement near Leesburg began in the late 1730s as Tidewater planters moved into the area from South and East, establishing large farms and plantations. Many of the first families of Virginia were among those to settle in the area, including the Carters, Lees and Masons. Leesburg was built in 1740 and named for the Lee family, early leaders of the town and ancestors of Robert E. Lee. It may have been named to honor the influential Thomas Lee, or more generally the Lee Family. Nicolas Minor (Captain of the Fairfax Militia) had acquired land around the intersection of the Old Carolina Road and the Potomac Ridge Road (present-day State Route 7) and established a tavern there (“George Town”) in honor of the reigning monarch of Great Britain. The genesis of Leesburg occurred sometime before 1755 when Minor laid out the town on a traditional Virginia plan of six crisscross streets. The name change was passed by an Act of Assembly in 1758. Francis Lightfoot Lee and Phillip Ludwell Lee, two of Thomas’ sons, were early town trustees. However, the town is not named, as some have thought, for Thomas’ great-grandnephew, Robert E. Lee.

During the War of 1812, Leesburg served as temporary haven for the U.S. government and its archives (including the Declaration of Independence and the U.S. Constitution, as well as portraits of early American leaders like Benjamin Franklin).

Early in the American Civil War, Leesburg was the site of the Battle of Ball’s Bluff, a small but significant Confederate victory. The town frequently changed hands over the course of the war as both armies traversed the area during the Maryland and Gettysburg campaigns. The Battle of Mile Hill was fought just north of the town prior to its occupation by Robert E. Lee in September 1892. Leesburg served as base of operations for Col. John S. Mosby and his partisan Raiders. The local courthouse (built in 1894) was among the few courthouses in Virginia not burned during the Civil War (1861-1865). In the 20th century, Leesburg was the home of World War II General George C. Marshall, architect of the famous Marshall Plan that helped re-build Europe after the war.

Leesburg continues to serve as the center of government and commerce for Loudoun County since the county’s formation in 1757. The town’s Historic District was placed on the National Register of Historic Places in 1970 and cited as one of the best preserved and most picturesque downtowns in Virginia. Downtown merchants have recently labeled themselves as “Loudoun’s Original Town Center,” largely in response to the growing number of mixed-use shopping areas in proximity.

Leesburg’s history spans four centuries and its historic sites and museums reflect the rich and varied history. Leesburg is part of the “Journey Through Hallowed Ground National Heritage Area,” a 180-mile-long region that stretches from Gettysburg, Pennsylvania to Thomas Jefferson’s Monticello in Charlottesville, Virginia. Leesburg sits near the center of this corridor, making the Town a perfect hub for visitors to experience all that the Journey offers. Other sites that are listed in the National Register of Historic Places, include:

Nestled in the heart of Loudoun County and serving as the county seat, Leesburg is a picturesque small town with a bustling historic district filled with boutiques, craft breweries and a dozen coffee shops and cafes. On King Street, (known as restaurant row), dine on oysters, farm-to-table fair and street tacos while soaking up the storied ambience of quaint town. Stroll the streets to view the numerous murals and sculptures, and many other of the town’s arts and cultural district.

Whether hiking, biking, or just enjoying the beautiful scenery, Leesburg is a wonderful place to be outdoors. Spend time enjoying some of the following places:

Worthy of honorable mention are the over forty award winning wineries and tasting rooms, each uniquely special, that surround the Leesburg and Loudoun County area. Wineries and tastings rooms on rolling hills and cliff-edged slopes, with views as sumptuous as the Viognier, Cab Franc, Petit Verdot and Norton grape varietals grown in the county and Virginia. Loudoun wineries have been grouped into six wine clusters. Focus on just one cluster or follow the “wine trail” through our Northern Virginia wine region for a richer experience. The clusters of wineries include:

Already a Loudoun wine connoisseur? Make sure to also experience our growing craft beer scene with four beer clusters consisting of over thirty breweries in the region. Here in the Leesburg and Loudoun County area, the craft beer scene has really taken off and become engrained in the community. Beer clusters are as follows:

Leesburg is served by the Loudoun County Public School system, which are consistently ranked among the finest in the Nation. There are twenty-three top public schools serving 16,178 students for the 2022 school year. Eleven elementary schools that serve students kindergarten through fifth grade, four middle schools for students sixth through eighth grade, and four high schools for students in grades nine through twelve, with four alternative or vocational schools.