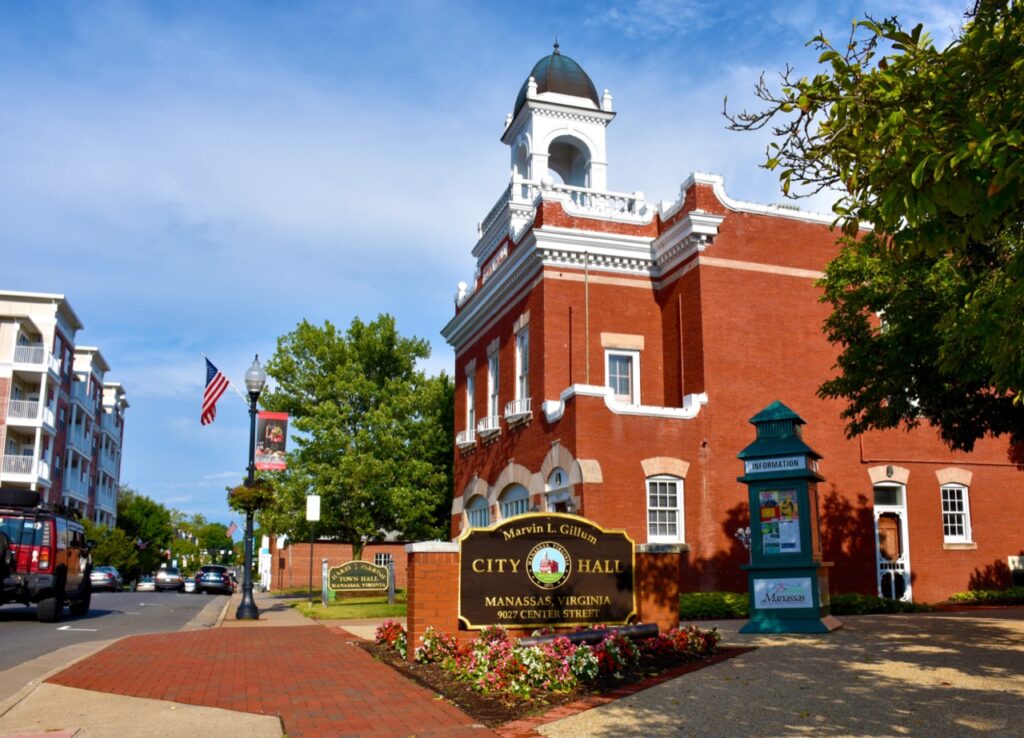 Manassas is a large independent city in the Commonwealth of Virginia, located in the Northern Virginia region and approximately thirty miles Southwest of Washington, DC. Based on projections by the latest recorded U.S. Census, the population is 42,772.

Living in Manassas offers residents a dense suburban feel with a diverse community rich in many cultures and experiences. A big attraction to families and young professionals—most of which own their homes–are the wide variety of restaurants/bars, coffee shops, shopping plazas, and parks.
The city borders Prince William County and the city of Manassas Park. In 1894, Manassas was designated the county seat of Prince William County, replacing Brentsville. By 1975, Manassas was incorporated as an independent city, and as per Virginia law, was separated from Prince William County.

Manassas began life as Manassas Junction, so named for the railroad junction between the Orange and Alexandria Railroad (O&A) and the Manassas Gap Railroad (MGRR). The O&A owned the railway from Alexandria through Manassas to points south, ending in Orange, Virginia, while the MGRR was an independent line constructed from Manassas Junction through the Manassas Gap westward. In addition, Manassas was the site of the first large scale military use of railroad transportation. These original routes are now owned by the Norfolk Southern (NS) railroad. Amtrak and the Virginia Railway Express (VRE) provide regular inter-city and commuter service to the city and surrounding area on the tracks owned by NS. Manassas station is served by VRE and three Amtrak routes: the New York City to Chicago (Cardinal); Boston to Roanoke (Northeast Regional); and the New York to New Orleans (Crescent).

The City of Manassas has several important historic sites from the period of 1850 – 1870. In July 1861, the First Battle of Manassas—also known as the First Battle of Bull Run—was fought nearby and was the first major land battle of the American Civil War. The Second Battle of Manassas (or the Second Battle of Bull Run) was fought near Manassas on August 28–30, 1862. At that time, Manassas Junction was little more than a railroad crossing, but a strategic one, with rails leading to Richmond, Virginia; Washington, DC; and the Shenandoah Valley. Despite these two Confederate victories, Manassas Junction was in Union hands for most of the war. Following the war, the crossroads grew into the town of Manassas, which was incorporated in 1873.

The Manassas City Public Schools serve the City of Manassas. There are five elementary schools (grades K-4), two intermediate schools (grades 5-6), one middle school (grades 7-9) and one high school (10-12 grades). For the 2022 school year, there are nineteen private schools serving Manassas, Virginia. The best top-ranked private schools in Manassas include All Saints Catholic and Seton School. Within the vicinity of Manassas are branch campuses of American Public University System, George Mason University, Northern Virginia Community College (NVCC), ECPI College of Technology and Strayer University. Though some of these are just outside the city limits in Prince William County, NVCC and Strayer call these branches their Manassas Campuses.

Fun Things to do in Manassas